We have a new single membership fee, which if paid before the 31st August 2022 is €15 for the 2022/23 season.  From September 2022 membership fee will be €20. This increase is in order to cover the rising costs of our expenses. So renew early to avail of the discount. See the “Annual Membership Subscription” page for details on how to pay. 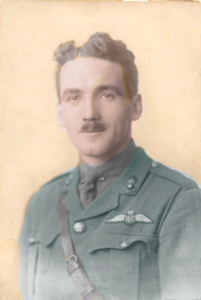 Foxrock History Club member Philip Lecane, is writing a book about George McElroy.  Ireland’s most successful Fighter Ace of the First World War, McElroy has been completely forgotten outside the very small community of WW1 aviation enthusiasts. The talk will look at his childhood in Donnybrook, living above the schoolhouse where his father taught. Following his education, he joined the civil service. Upon the outbreak of war he joined up immediately, serving in turn as a motor despatch rider and an infantry officer. Convalescing from a surgical procedure, he was in Dublin during the Easter Rising. Having subsequently studied at the Royal Military Academy, Woolwich, he volunteered for the Royal Flying Corps. During eight months in the skies over the Western Front, he shot down 47 Germany aircraft, making him one of the leading fighter aces of the First World War. On 31 July 1918, he was shot down and killed by ground-fire.

Sept 20th 2022 @ 20:00 (In the Parish Pastoral Centre and also via Zoom) The Big Houses in Dun Laoghaire-Rathdown as Religious Institutions.

As religious orders expanded following Catholic emancipation in 1829, they needed suitable premises for accommodation and ministry work. Some orders acquired substantial properties due to a rise in the number of men and women entering religious life at that time. The large estates that dotted the landscape south of Dublin city provided the space required. The big houses and their surrounding land allowed for expansion as many religious orders established boarding and day schools. Religious orders involved in healthcare also needed large premises to adopt as asylums, convalescent homes and hospitals.  Deirdre, who is a professor of history at UCD, has researched the Dun Laoghaire- Rathdown area’s big houses that have been or are still used as religious institutions. Deirdre has written on Nano Nagle: The Life and the Legacy (2018) and The Benedictine Nuns & Kylemore Abbey (2020).

All our meetings are held in the Foxrock Pastoral Centre, which is at the junction of the N11 and Kill Lane. We meet on the third Tuesday of every month between September and May. The meetings start at 20:00 and firstly is a short talk of 20 to 25 mins. this is then followed by the main talk. After the talks there is an opportunity for questions and answers. Then after the vote of thanks, tea and biscuits are served and you can get a chance to meet the speakers and ask questions you may have.