THE LIFE AND TIMES OF JOE KEOGH – TENANT OF THE FARM OF DEANSGRANGE HOUSE, FOXROCK 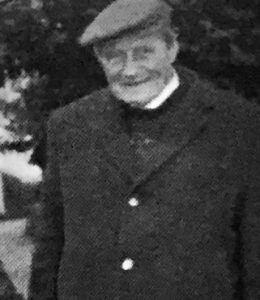 born on the 25 April 1917 on the estate of Michael Francis O’Brien of Deansgrange House, Foxrock. Joe’s parents had come up to Dublin from Wicklow to work on the farm of Deansgrange House. Joseph’s father being the ploughman on the farm. Joe recalls his father ploughing the land where the Stillorgan Shopping Centre now stands.

Joe could turn his hand to any task given to him but he developed a way with horses which was to last him throughout his working life. He could never imagine himself as working just as a farmer.

There was much talk of the great war in the early 1920s and young Joe was seeing soldiers returning from the front. Maybe this gave him the idea that he wanted one day to be in uniform himself.

Joe’s schooldays were spent in St. Brigid’s National School in Foxrock. He can recall the names of his teachers: Patrick Murphy, Gerald Collins and John O’Regan, who was the principal. Miss Kathleen Feeney taught the infants. ‘Things were different then’ and Joe hasn’t any happy memories of his schooldays.

In 1925 Joe received his First Holy Communion. A few years later he received his Confirmation, which he has a special photograph of with his father and mother. Being the youngest of five children Joe was taken to Dublin City, seven miles away, for that special occasion.

When he finished school in St. Brigid’s, at about the age of fourteen, he joined his father working on the farm. But about that time the farm was declared bankrupt and went under the hammer in 1932. Still, there were other farms around Foxrock where young lads got a day’s work. In the evenings Joe remembers walking to dances in Blackrock and even further afield to Greystones where the National Foresters held their dances. Joe says his great hobby was Ceili and old-time dances and he can play the accordion too.

Having seeing the hardship his father endured as a farm hand Joe definitely decided to pursue a career with more security and a pension on retirement. The Second World War broke out in 1939 and in June 1940 Joe headed off to Kill-of-the Grange for his enrolment form. He is very emphatic that he wanted to join the permanent forces. Some of his friends were only joining for the duration of the war. But Joe figured ‘They’ll get nothing out of it, and when the war is over, I’ll still be soldiering’.

Joe did his training in Collins Barracks. He then had to go to Cathal Brugha Barracks for his medical exams. ‘The doctor there would give you what you’d call an exam, them lads wouldn’t take chances’. Joe’s body was physically fit from twenty-three years growing up and living on the farm in south county Dublin with the healthy sea air blowing in from the Irish Sea. He passed his medical, swore himself in. Dressed in the Irish Army uniform and proudly declared to himself, ‘I’m a soldier now’.

Joe served in the 5th Infantry Battalion and had completed five years in the Army when the war was over. They were looking for men for the Equitation School in McK

ee Barracks and Joe was transferred there. In the Equitation School Joe’s skill in horsemanship which he acquired out on the hillside of the Dublin farms were put to full use. He recalls turning out in full dress, long leggings and all, for ceremonial parades on horseback.

Joe served in McKee Barracks until May 1950, when one day he was told: ‘You’re for the Curragh tomorrow’. He hadn’t been out of Dublin much before, but had gone to Cork for a big parade through the city in 1942.

Joe’s main responsibilities on the Curragh Camp was drawing fuel to locations with horse and cart, though he was often called on to do other duties, even helping with the transport of linen for the Military Hospital.

Joe married in 1946 but it wasn’t until September 1951 that he came to live in Hillside in Kilcullen. Having memories of the insecurity of a tenant homestead at Deansgrange House, Joe was happy to have a home of his own. Joe and Elizabeth Keogh fostered two girls in 1952. One girl, Phyllis, now lives in Australia with her Antrim born husband Eddie O’Neill. His other child Annie married Jimmy O’Toole and lives in England with her five children.

Joe never returned to Deansgrange, his parents died within eight months of each other. His only trips abroad were with the Army pilgrimage to Lourdes in 1958, then in 1992 he went to London for Christmas to visit Annie and her family. Joe’s first wife died in 1969 and three years later he married Mag.

Joe retired in 1977 after thirty-seven years in the army with a ‘full pension and a good record’. It was shortly after his retirement that Joe began to give a helping hand doing the work in the Church and grounds of the Church of the Sacred Heart and St Brigid, Kilcullen. Thus began a commitment that continues non-stop till the present day (1995). For years it was Joe who opened and closed the Church each day. He rang the Angleus bell with military precision until it was replaced by the electronic bell. He organised the collections at most of the Sunday masses and if there was no one to serve the Priest Joe was never shy to remove his overcoat and assist the celebrant as well as any deacon.

There is only one regret that Joe has and that is that back in Foxrock in the 1920s he was ‘never an alter boy!’.