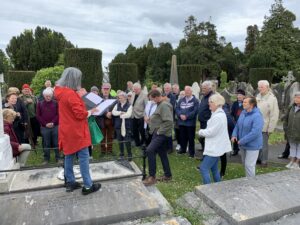 The Digging up the Raj tour led by Shabnam Vasisht pointed out the graves of the Irish and other people who are now buried in Deansgrange cemetery. These people served in India during British rule, which started as the East India Company from the 1600s and operated in India like a private company with its own armies. Then after the Indian Mutiny in 1847 its rule was replaced by ‘the Raj’ in 1858. Great wealth was made by many who served in India during these times.

Shabnam told us of the 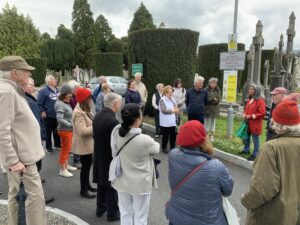 occupants of many graves who had defended the Crown through wars and mutinies, administered in the Indian Civil Service, or converted sun-worshipping heathens to ‘muscular Christianity’. Some names are recognisable in India but unknown in Ireland. We heard the stories of these people from the perspective of how they kept India under the control of the British Empire until the various countries gained their independence – Afghanistan in 1919, Nepal in 1923, India and Pakistan in 1947 and   Burma in 1948.

2) SHORT OUTING REPORT – A WALK AROUND BOOTERSTOWN AND ‘THE LOST VILLAGE‘ OF WILLIAMSTOWN on Saturday 11th June 2022 @ 11:00 a.m. with Michael Hughes 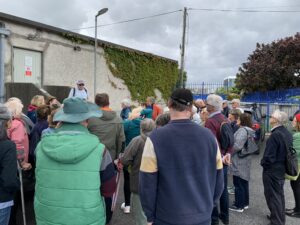 started at the church in Booterstown where Michael explained that Booterstown is shown on maps from the 1700s as “Butterstown”, as it was then the source of agricultural produce for Dublin City dwellers and for the local population. The Irish name is Bháile an Bhóthair (“the Town of the Road”) with its landmark “Punch Bowl” ale and coach house at the junction of Booterstown Avenue and the ancient coastal Rock Road of south County Dublin. The Booterstown parish was established in 1616 and its boundary was from Irishtown, through Donnybrook, Milltown, Churchtown, Rathfarnham to the top of Three Rock Mountain through Sandyford to Seapoint taking in Dundrum, Stillorgan and Galloping Green. 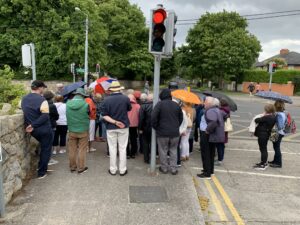 After being shown around the church, the convent of the Sisters of Mercy and the orphanage here, we moved to Pembroke Cottages, Rosemount House, the home for the Medical Missionaries of Mary, McCabe Villas, an early public housing scheme in this area. We then visited the grounds of St. Helens, now the Radisson Hotel, and stables area of Sans Souci which was a house of the La Touche family.   We stopped at the site of the assassination of   Kevin O’Higgins. Then the few houses occupied by Eamon DeValera on Cross Avenue were pointed out as well as the former home of Tom Roche of Cement Roadstone, Chesterfield, now subject to planning permission for apartments, as well as other interesting houses here.

The walk went to visit the area of “The lost village of Williamstown”. Then, returning up Booterstown Avenue, notes were given on the famous people who lived around the avenue and buildings of note in the area. 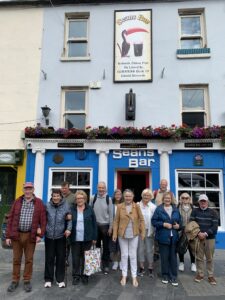 We travelled on the 9:25am train to arriving in Athlone at 10:51.  A group of twenty members took part in this day out. Firstly we headed to Athlone Castle arriving at 11:00 am and had a self-guided tour. The Castle has a very fine interpretive set of displays and rooms that take you through the history of Athlone from its early foundations to the present times. After our Castle visit we headed to lunch at The Bailey Bar and Restaurant at 12:40 p.m.  A very fine lunch was had by all and compliments were given to the staff here.  After lunch we then took the 14:00 Viking Boat tour of Lough Ree. Our guide Viking Michael gave us full descriptions of the areas we passed and the general history of the lake and environs. After the boat tour we paid a visit to Sean’s Bar which dates from c900AD, we t 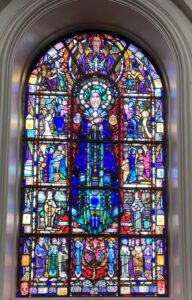 ook some refreshments here and chatted for about an hour. Then the group visited the main church which has some very fine Harry Clarke Studio stained glass windows. We then crossed over to The Luan Gallery to see some of the modern paintings on display.  Having finished at 17:30 we strolled up through the town to see the shops etc, and back to the train station in time for the 18:29 return train to Dublin. All in all a great day out, fine weather and good company. 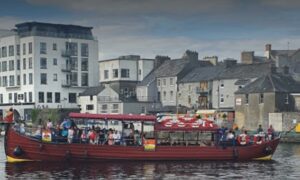